The National Service Secretariat (NSS) has directed all Service Personnel to take a mandatory paid leave in a bid to help curb the spread of the novel coronavirus in the country.

The Secretariat in a press release also directed all newly posted nurses yet to start their national service in April 2020, to also take April 2020 as their terminal leave.

“All National Service Personnel are to take their mandatory paid-annual leave effective Thursday, 26th March 2020 till the end of April,” The Secretariat directed in the statement.

The Secretariat also said “All newly-posted nurses who are due to start national service in April 2020, are also to take the month of April 2020 as their terminal leave.”

The service said these directives were arrived at after the President’s directive banning all social gatherings and that of the Public Services Commission’s circular recommending all interns, national service personnel, NABCO Officers and other non-essential staff to take their leave.

Find the full press release below 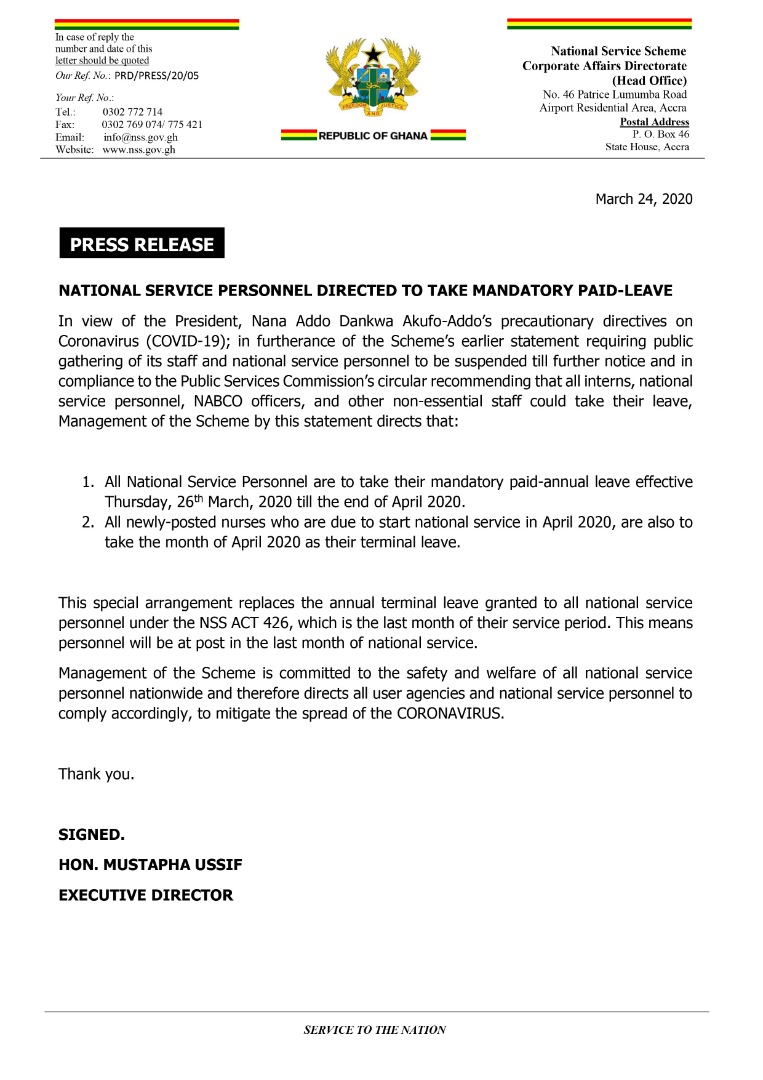 Confirmed cases of coronavirus in Ghana

As at yesterday, Monday, March 23, 2020, Ghana had a total of 27 cases with two deaths but 25 new cases have been confirmed of Coronavirus in the country.

READ ALSO:  Ghana Institute of Architects to sue gov’t over lack of board

This brings to total, 52, the number of cases confirmed in the country with two deaths recorded.

The 25 new cases were confirmed among the 1,030 people who are under mandatory quarantine in the country after arriving at the Kotoka International Airport hours to the deadline for the closure of the country’s borders.

The Minister of Health, Kweku Agyeman-Manu who made the announcement on Tuesday, said other persons in mandatory quarantine are yet to be tested.

“Out of the 185 test results received, we have 25 of those quarantined tested positive. If we add on to the earlier number of 27, it means we have 52 people testing positive in our country at the moment,” the minister said.

He said the 25 new patients have been handed over to the case management team and are being sent to various isolation centres for treatment.

Dry Tears Foundation donates to ‘Save them Young Mission’ as part...

Over 40% of uni graduates have no employment prospects – Investment...